Proudly fighting for the Omaha community for over 65 years.
OUR FIRM
PRACTICE AREAS
OUR ATTORNEYS
Home » Blog » Know the Warning Signs: What to Do in a Car Fire 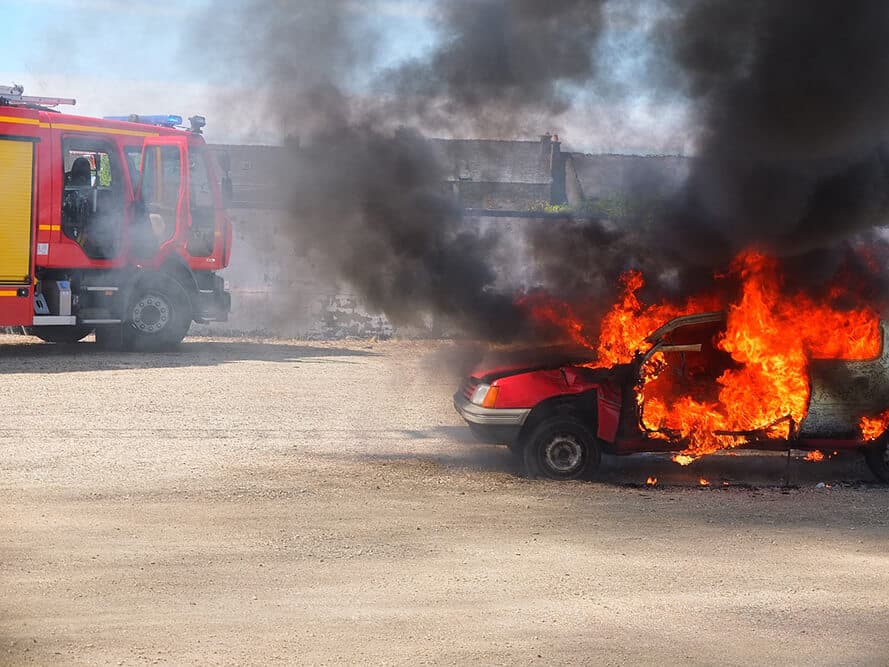 Vehicle fires can be incredibly dangerous. When mixed with fuel and the electrical parts of a car, even a small engine fire can quickly combust into an explosion that may give the occupants of the vehicle little time to escape. Auto manufacturers are creating vehicles that are safer than ever, but car fires continue to be a risk due to the myriad of electrical parts and batteries modern vehicles boast.

According to the National Fire Protection Association (NFPA), 174,000 highway vehicle fires were reported in 2015. 445 fatalities resulted from those fires as well as 1,550 injuries. The reported property damage that resulted from these fires amounted to $1.2 million total. The number of reported vehicle fires in our nation has gone down substantially within the last 10 years, but as you can see, we have a long way to go still until our highways are free from the risk of dangerous car fires.

Here in Nebraska, car fires are more of a prominent issue than in many other U.S. states. The U.S. Fire Administration reported that in 2014, 20% of all vehicle fires in Nebraska caused fatalities. Nationally, that same figure was only 16% on average for other states. 9.6% of all vehicle fires in Nebraska during that same year lead to injury. Nationally, the average was 6.7%. As also evident from these figures, vehicle fires tend to be deadlier than structural fires due to the higher possibility of gas explosions.

Know the Warning Signs: Reacting to a Car Fire

It’s vital for all drivers to be aware of the following signs of an imminent car fire:

If you notice any of these signs while off the highway, get the vehicle looked at by a professional auto mechanic as soon as possible. If you’re driving and notice engine smoke, sparks, or sudden changes in fluid/fuel levels and/or engine temperature, proceed with these steps as quickly and as safely as possible:

By knowing what to do in a car fire and following the above steps calmly and confidently, you can save your life and the lives of your loved ones. The best step to avoiding a car fire is to prepare for worst-case scenarios and ensure your vehicles are regularly maintained.

If you’ve been injured in a serious Nebraska car accident that involved a vehicle fire and feel the accident may have been caused by negligence of any type, don’t hesitate to reach out to Welsh & Welsh today. Our personal injury law firm can pair you with an Omaha car crash lawyer who can tell you the merits of your potential cause and help your family recover.

Google Rating
4.8
Based on 8 reviews

Welsh & Welsh PC LLO
4.8
Ken Levinson
01:34 05 Jan 20
Simply one of the best injury firms in Nebraska. I have gotten to know Chris well as a fellow trial lawyer. HIs knowledge of the legal intricacies and court rules is first rate. He is also dedicated to teaching other lawyers how to best handle their cases and help the profession.I am most impressed with how much Chris cares about helping his clients. This is demonstrated constantly by his work ethic and how he listens to the needs of his clients.If you are looking for a law firm to help you or a family member, I strongly recommend the Welsh and Welsh team.
Gerard Zak
03:35 18 Apr 18
Awesome lawyers, helped me with a car accident settlement, I would highly recommend the Welsh team.
Stephanie Roll
15:23 23 Mar 18
Chris was great to work with through out the duration of my case. I would definitely recommend Welsh & Welsh to others. Chris took the time to get to know me and my case. They made me feel comfortable and truly took the time to explain each step to me.
Christopher Nace
21:37 24 Jan 18
Chris Welsh and the team at Welsh & Welsh are not only incredibly talented trial lawyers, but they are caring people. They are the types of lawyers that will go to battle for you in court and listen to you when you just need someone to talk to. These are the people you want on your side when you need an advocate.
Rob Sachs
20:33 24 Jan 18
Chris Welsh is an incredibly responsive, intelligent, and hard-working lawyer. He is deeply committed to his clients and to his community. Everything about him demonstrates his strong commitment to family values which makes him the kind of lawyer you'll want to deal with when serious injury strikes you or your family.
See all reviewsWrite a review